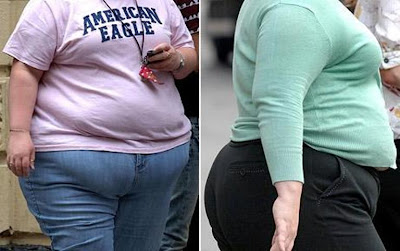 The Ancient Greeks considered larger women to be strong and fat was a sign of health and wealth. There is a country in North Africa which considers larger women beautiful. 90% of all nude portraits in the 19th centry contain large cherub women. Wide hips meant a woman was ready for child bearing and "curves" were adored. You are healthy if you have some heft to you.

Well, thank you, America/Western Ideals/21st Century. Today larger women would rather be invisible. Larger women are scorned in today's society. Obesity is the number one cause of preventable death. Healthy Americans encourage fat people to get off our lazy fat ass, put down the McDonalds cheeseburger and work out. Ugly fat can be contained, controlled, and eradicated with hard work and dedication.

Thanks to today's insane and improbable beauty standards, I will never be considered drop dead georgeous unless I pay someone thousands of dollars to do my make-up each day, go under the knife to slice each slab of fat off of my body, just like we slice meat off a turkey and get fake crowns put on all my teeth so they blind people with their whiteness. Yeah, right.

I just finished reading a book called, "Good in Bed." No, it was not a racey romance novel or a karma sutra book. It was a novel about a young woman, Cannie, who is a journalist and lives in Philadelphia. She is a size 16 and hates every part of her body. The book takes readers into an adventure of self-esteem, self-loathing, unexpected surprises, ignorant ex-boyfriends, depression, and self-acceptance. This book has now made my favorite book list because Cannie was incredibly easy to relate to. She has my dream job - journalism, she lives in my city - Philadelphia, she has a dog and great friends. I love how she says "There are many words that are used to describe me such as genuinene, loving, loyal, funny, honest and hard-working but the only word I can think of myself is fat."

Ditto kiddo, and triple it. Throughout high school I had a decent body. I wasn't a skinny super model and I never looked good in a bikini, however, I was decently slender and had curves in the right places...namely my ass. Of course college happened and my nice little body became morphed into a large oozing mass of too much cafeteria food, late night pizza, and underage beer. The heft around my midsection began to collect and expand. By senior year I was huge. My double chin rolled over the collar of my graduation gown and my full cheeks resembled Santa Clause. Not to mention that I thought I looked good with blonde hair and by graduation my hair was half greasy brown and half over processed blonde. Hot.

Then I lived in a convent for a year where ample food was at my disposal. Every Sunday I was treated to an amazing buffet of home cooked meals. We ate as a community on Weds and Sundays so whatever was cooked...you ate. Every meal was delicious but I doubt every meal was healthy. Of course I went to the doctor who told me I needed to lose weight or else. I found the motivation somewhere and limited sweets, sodas, beer, and fast food. I drank water like a champion and worked out at least 3 days a week. It was hard and I was tired a lot, but the gym was right next door to the convent so I had no excuses not to go over and work out. I lost a total of 20 lbs! I looked great and I felt a lot healthier.

Naturally I fell off the wagon. I discussed this in a previous post. I gained all the weight back and now I'm out of control. I am living with a friend and am subject to her diet. I don't get home from work until close to 7pm and sometimes don't eat dinner until almost 8pm. Our meals are always delicious and normally home cooked but we are big fans of unhealthy as well. For example, last night I got home around 7:40 or something. We went to Wendy's for dinner. I had a Crispy Chicken Sandwhich, Jr. Bacon Cheeseburger, Fries and a Salad. Then we split a Frostee. Mmmm Healthy.

I don't have time to work out. I don't have a venue to work out. I was trying to walk every other night at my favorite park but when I get home close to 8pm, its just not feasible. I really don't think I'm going to be able to reverse the effects of this dramatic weight gain until I have my own apartment and can purchase a gym membership or find a new walking route. I kind of wish I had a dog so I'd be forced to get up early every morning to let him out for a walk!

I have always been a little self conscious (except in high school when I was perfectly happy with my weight despite the fact other people didn't think I was skinny enough). I think the tip of the iceberg wasn't my new doctor prescribing diet and exercise again. I think it was the night I went out with my friend, Sarai. We had a few drinks and didn't have dinner so we went to Lorenzo's a sweet pizza joint that sells giant slices of pizza for $2.50. I was eating one of my two slices of pizza the size of my head when I accidentially knocked into a guy on the sidewalk. (I remember it being kind of crowded). I just bumped his arm but he actually said to me "watch it big girl." I can still hear those scornful words.

Then there was a guy I was kind of talking to at a bus stop for awhile. We swapped numbers and I thought we might actually hang out. That night I thought to myself "Oh my goodness! Maybe he didn't notice that I was fat! Maybe he actually thought I was beautiful and wonderful and amazing!" I let myself think this only to find out that he thought "it would be nice to hold me because I have more body to me." This other girl he was crazy about was "really thin." See, fat chicks don't want a guy who loves her because she is has more body, is fat, bbw, thick or curvey. Fat chicks want a guy who loves her and doesn't notice she is fat. Or if he does notice....he doesn't say anything about her weight.

The night I caused a whole club to clear the dance floor while I danced to "Baby Got Back" was memorable....but I can't help but think that everyone was so impressed by me because of my "courage." Despite my undesirable body size, I still went out and danced. I gave hope to fat people everywhere. I don't want to give hope to anyone....I want someone to see me as a good dancer before they see me as that fat girl who can dance. Just like successful black people want to be known for being smart or successful instead of black and successful or smart and black.

Your parents tell you that you are beautiful, but they have to. They brought you into the world and even if you are an ugly duckling now, they can't throw you back. If I'm so damn beautiful than would someone explain to me why no attractive, normal, single male is interested in me. Why have I been single for going on 6 years now? Even if I was happy with myself, society would beat me down to remind me that I'm not pretty enough for the guys out there. I can't be happy with myself if I'm this huge blob that takes up space.

My best friend up here is 30 years old. Our age difference is rarely realized until we get on the topic of men. My worst fear, I decided, is dying alone....childless...without a husband. My friend thinks that is ludacris because she has come to the realization that some people will walk the planet, never finding their souls counterpart. Granted, she only knows of one or two married couples her age when I know about 75 married/engaged couples. People tell me I need to embrace the single life because it is the only time I have to be by myself and to find out who I am. Believe me, I've spent plenty of time with myself, I'm aware of who I am, who I will become, who I wish I was and who I'm glad I am not. I don't need any more time for self discovery or I'll just destroy myself.

I guess I'm just to young to understand that dying single and alone is not the worst thing that could ever happen to me. I guess I'm too immature to realize that I am beautiful. The average American doesn't give a shit what you look like on the inside. Its all a superficial game of judging books by their covers.

So while "Good in Bed" was empowering, I'm still resting by the poolside of self pity and I'm comfortable here. I don't have the energy to make a change in my lifestyle right now. In a way, I don't even have any control over my life until I can be on my own.