When the Common Cold Feels Like the Plague of Death

I'm sick for the second time in a year. A whole year. Seriously, that is a personal best in terms of health. I mean really. When I was back in social work, I would get sick every other month. That was because I worked in really close quarters with adorable germ sponges, also known as babies and toddlers. Now in Corporate America, I rarely come in contact with children. Therefore, I've enjoyed an entire year of little to no icky sickies. However, somehow, somewhere, I caught a nasty bug and have a common cold. Shouldn't be a big deal but because I was so used to being healthy, this common cold feels like the plague of death.

Stuffy nose. Runny nose. Sneezing. Coughing. Exhaustion. Hot flashes. You name it, I got it. Also a bit of an upset tummy. It is like my entire immune system is on vacation. It sucks because this is a beautiful weekend in Philadelphia and I would love nothing more than to get a nice run in and hike with my dog in a local park. But alas, I've been outside a few times but the walk tires me out. So I come in and rest. I'm hoping a day of mostly resting will allow me to be somewhat functional tomorrow. I'd like to kickbox, run errands and do laundry tomorrow before gearing up for another epic work week.

Epic about sums it up. I finally have a permanent boss! This is great! I have someone who I can go to for questions, ask for support, and help direct me so we're actually accomplishing things in the Marketing Department versus just putting out fires here and there. Triage mode, is what I call it. I've done well these past six months but I am more than ready to apply a concrete strategy to my work. So, yay for the beginning of structure!

Life is life. I've been really tired and am officially panicking about my upcoming half marathon that I'm not ready for. It is in November, as I have mentioned before. Dun Dun Dun. I've been sporadically kickboxing due to edema in the ankles, exhaustion, and this damn cold. I'd like to be back on track.

That is about it from this end. Just thought I'd provide a quick update since I'm laying low and trying to do what I can to help my body beat this stupid stupid cold. 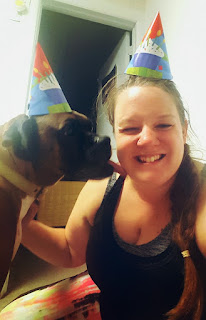 I never have much time to write anymore. I'm still going to keep this blog up for as long as I can, but please forgive the sporadic posts. Over the past few months, I've had plenty of adventures and misadventures. Work has been really really insane. I started feeling the pressure of working three roles in addition to my own with limited support or direction. I've been doing a great job and the challenges keep me coming back for more but it does get exhausting.

July was jam packed with good times. I took Bronx to Center City for the Party on the Parkway July 4th. My best friend David and I participated in Yoga on the Outfield where we got to participate in an hour long yoga class on the Philadelphia Phillies outfield (bare feet in the grass). I was geeking out. I think I was more excited about being on the field than doing yoga. It was a fun time. I also did something kind of stupid. I ran/walked over 13 miles to take photos of the 50+ painted donkeys for the DNC which was held in Philly. That was brutal but a lot of fun. The running community makes jokes about how "we do not speak of the Donkey Run" because we all felt like we were going to die. Also in July, I made David join me on a #YardsbRUNch run. We also almost died. haha Summer running has been damn near impossible and I am nowhere near ready for my half marathon in November.

August was busy too. It started off really exhausting. I kept trying to take off from work only to have to come in to do things. I had to work a weekend. There was no vacation in sight. When you're one of 1.5 people trying to keep a department together, you tend to be the only person who can attend meetings and make things happen. Thus, when everyone and their mother is going on vacation, you are working to keep the ship afloat. Did I mention I was a little burned out? Love the job but can't wait for more support so I can really go about it strategically instead of in constant survival mode.

I turned 29 on August 24. I celebrated by going to kickboxing! 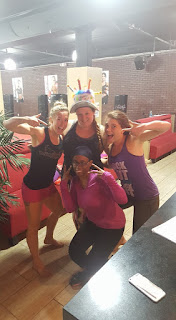 It was a great class. My kickboxing partner in crime, Anita was there to celebrate with me. She even got me a bottle of Grey Goose! As you can see from the top of the post, Bronx gave me extra birthday kisses.

The day after my birthday I went on a Drink Philly Booze Cruise on the Delaware River. It was a three hour tour with an open bar and buffet and live music. The night was perfect: beautiful sunset, great people and excellent weather. I even had my coworkers help me do something special with my hair: 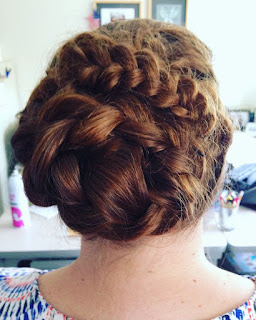 They did a fantastic job! I went on the cruise with bff David. 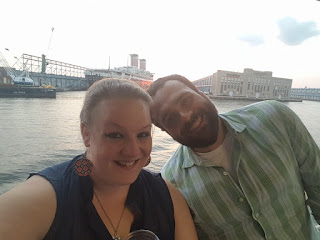 Best Friends! (for about 12 years now) All in all my birthday was a success. My coworkers made it special, my friends showered me with love and my dog understood it was an important day of sorts. So in honor of my last year of my 20's I've made a bucket list: 29 things to do before 30. The list includes a lot of things I've always meant to do but haven't had the chance to do. I'm really excited about it.

Other August highlights include ROW 2 at Collective Soul and Goo Goo Dolls. That was nothing short of an amazing concert. Also the Philly 10K. I wasn't ready for it so I winged it. I was so worried I'd be too slow and be kicked off the course. I made it without getting carried off! Woo! That was a tough race given the heat and the distance. Once again, I'm nowhere near ready for my half marathon in November. 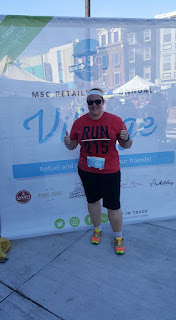 Also coming up, well not race wise. I actually just missed a 5K in NJ because I had to work Saturday morning :( I have a 10K at the end of the month and then I guess the half? Sheesh. Anyway, coming up is a bunch of work trips! Given my hard work and dedication, I'm being sent off for some professional development. I'm going to Chicago in October, Las Vegas in November, and Arizona in December! I have never been to any of these places so I'm really excited about it. Plus, I love conferences. Great opportunities ahead!

So now we're in September. I celebrated David's 30th birthday with him and his family. I made him a scrapbook of 12 years of our friendship and gave it to him on his birthday. It even came with its own playlist. Pretty great. I love it when I can give someone a meaningful yet surprising gift. Always a good feeling. I'm ready for fall as I'm ready to run in less than 80 degree weather. I love summer but this one was too hot. I am glad I made it to the Shore, twice though.

That about sums it up. Hopefully I will write again before winter. I'm just keeping my head up and rolling with the punches and trying to have fun in between.