Spring, Where are you? / What's with the noose? 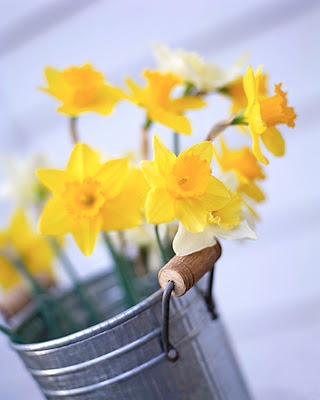 Why hello, it has been a while. I haven't dropped off the face of the earth or anything, just been hiding in a busy corner of it. The past few weeks have went by in a blur of illness, major events for work, and a slow yet growing social life.

Highlights have been a successful academic awards ceremony for the kids at work, a highly attended book fair for work (my brainchild) and an epically successful major fundraiser that I sold my soul to (at least for the night).

So there are two major things on my mind. I really want to be like Peter Griffin from Family Guy and say, "You know what really grinds my gears?" Well, I'm frustrated that it is March 30th and the weather is still cold as shit. Ok well literally, shit is not cold, but I'm unhappy. I was hoping to retire my winter coat days ago. Now, they're predicting a Nor'Eastern with snow and crap this weekend. WHY??? This winter started early, is lasting forever, and is horrible. I know I sound like a whiney brat, but I am so sick of the cold weather and ready to break out the flippy floppies and t-shirts. In fact, on the four warm days we had, I did just that. My fellow Philadelphians thought I was crazy and they stared at my exposed feet while wrapping their heavy jacket around their body out of habit. I knew what I was doing, I was milking the warm weather for what it was worth.

Second thing. So today I'm on the EL, commuting to work, late, and this guy gets on the train car that I'm on. He's wearing a big green trench coat, and a variety of other clothes. I figure by the look of him, he might be really poor or homeless. I don't judge so I just sat there minding my business. He took a sip of something from his water bottle and then took off his jacket. He reached into his bookbag and pulled out a rope. Then he stood in front of us, the confused passengers. I figured he could be an old navy vet or something and would demonstrate how to tie knots in exchange for money. Its not a crazy idea, I've seen the evangelists, the people preaching the world will end soon, trumpeters, drum lines, break dancers, acrobats and just about everyone out in the streets of Philly trying to earn some money. Then you have your "hungry please help" people, handicapped people with cups, and the occasional, "do you have a quarter, $1, $5, anything?"

So I'm sitting on the EL, wondering why this guy has a rope, and then see its actually a noose. A feeling of awkward and discomfort started to come over me. The woman sitting across from me got up and either left the EL or changed seats. The people behind the man were oblivious to his...awkward display. I sat there, wanting to move but also trying to figure out what's with the noose?

I thought of the practicality of hanging yourself in a SEPTA EL car. He was tall, it wouldn't work. Plus, his rope wasn't that thick. It would probably snap if he tried something crazy. Maybe he was an exhibitioner, or and old member of the modern day Black Panthers that hold rallies outside the convention center requesting all black men to find Jesus, become better husbands and sons, and overcome the adversity of the majority. Or perhaps he'd whip out a sign that read "hung out to dry, need food and money" and the noose was there to prove a point.

He also had a fanny pack in addition to his bookbag and I didn't want to think what could possibly be in there. Thankfully my stop came before I could figure it out. I might never know what he was doing in that EL car unless it makes the news. I know I was uncomfortable and for the first time, really alarmed by a "strange person." There are tons of reasons as to why he had a noose draped over his shoulders. Right? I guess we'll never know.

So last night, after a particularly not so great day, I decided I was going to take a nice hot bath. I really wanted the relaxation experience so I lit candles, put on classical music and poured myself a glass of wine. Now, I have never taken a bath in my bathtub in the apartment but it looked a lot larger than most bathtubs I have been in. So I figured I'd fit nicely in it and maybe have to bend my knees for ideal soaking comfort.

The problem is, I don't have a plug for my drain. I decided to use a coffee cup because it turned out to be the perfect size to cover the drain hole. I began to fill the tub and put a whole bunch of bath salts, bubble bath mix and even one of those gel bath balls. The tub filled up with hot steamy and bubbly water.

I stopped the water after the tub was a little over half full. I figured my body would cause the water levels to increase significantly. So I turned the lights off, put the candles on the ledge of the the tub, and stepped in.

The heat from the water felt awesome on my feet. As I submerged myself into the tub I realized I could use some more water. I turned on the faucet and alas, nothing but cold water came out. I had used up all the hot water! Giving up on that, I tried to lay back in the tub, bending my knees so the water would cover my stomach and chest. Well, this failed for obvious obesity reasons.

While lying in this awkward position I heard the faint sound of water draining. It was then when I realized that my coffee mug was not sufficently blocking the water drain. So I ended up sitting in the tub with water barely covering my legs until there was no water. I then got up and took a cold shower since I had used all the hot water.

After my cold shower, I blew out my relaxation candles, chugged my glass of wine, proceeded to watch my fish swim around for a half hour, and then decided it would be a great idea to read the cards from the Cranium game. I tested myself to see if I knew all the Humdinger songs. Then I pulled down my high school journal.

While reading my high school journal I was embarassed. One, because the writing is AWFUL. It screams hormonal teenager who can't write for crap. (I've improved in my writing so much by now) Two, because I did some really stupid and embarassing crap in high school that unfortunatly I still do today. I found a quote that I think I came up with on my own. It read:

"Don't make someone your world only to become their option."

Wow. If I wrote that, that is the most profound thing I have ever said! Words to live by.

So tonight I'm not going to try any cool relaxation technique. I'm going to get off work late, go home, watch Grey's Anatomy and go to bed early. I can relax in my sleep. 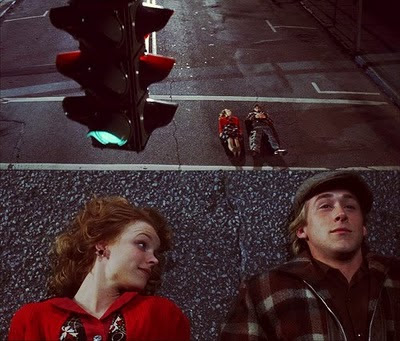 You know in the movies how the couples work? Usually you have one person who is really busy or going through a rough patch in their life. They're trying to figure themselves out and do what is the best thing for themselves. Then you have the other person swoop on in and completly turn the stressed out person's life upside down. The couple starts going and doing things that the one person wouldn't do on his or her own. The other person brings the life out of the crazy stressed out one. I think the words, "just live a little" are uttered at some point.

I always thought I was going to be the creative and wayward life changing one. I never even considered the possibility of being hit by a Mack truck of surprise and having my world turned upsidedown. I didn't think I would be the one laying under traffic lights or taking random road trips without a concrete plan. Nope, never considered it.

I wish I could tell you that all of those things are happening but they are not...and that is ok. I'm not even complaining for once. I think I just realized that I need to be open to getting the wind knocked out of me as I am swooped into the arms of some crazy adventure. The thought of laying under traffic lights or road tripping spotaneously, makes me happy. The thought, that is...of course with my structured life and marriage to my job, there is no room for such spontaniety.

So maybe I don't have to be someone else's whirlwind. Maybe someone will come along and save me from myself. Maybe he'll be MY whirlwind and once I'm slapped out of my work clothes and stressed out outlook, I'll be a whirlwind too. We could be whirlwinds together. However, I prefer to be more like a hurricane.