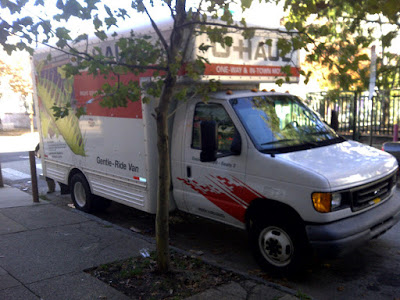 That's right folks! I have officially moved! The day I have been dreaming about, whining about and pining for, finally came. It was an epic adventure of a weekend (to which my body is still recovering) but it was worth it. As promised, here are the deets.

Tuesday 11/2 - I officially signed my lease and was supposed to get my keys but they were not available. So, I got to see the place and started freaking out. The sink in the bathroom was clogged, the fridge was a total disaster inside, there was dirt everywhere, the painters left their stuff and the apartment was a lot smaller than I had imagined (since its been almost a month since I saw the place). I was starting to stress out about a variety of things. However, Pop said he'd clean and fix things up for me and that keys would be waiting for me at the pizza shop when I moved in.

Fast forward to Friday 11/5 - I was supposed to do two car loads with Sarai and clean the apartment before moving in on Saturday. I wanted to bring stuff like dishes, cleaning supplies, boxes without lids..etc. That two load, turned into one load which turned into a minor disaster. We hit traffic upon leaving the burbs and finally got to the apartment an hour later. Well, as luck would have it, the keys that were left for me did not work in the front door. I called my landlord and an hour later...he still didn't show up. Sarai was really sick and was feeling worse by the minute. I had no choice but to unload the car onto the sidewalk and around the front door and send Sarai home so she could get to bed. So I stood there, on busy Race street, with a large portion of my belongings including a case of beer, toilet paper, cleaning supplies and various odds and ends.

Suddenly the door to the building opened and a guy about my age popped out. I nearly pounced on him as I said "I LIVE HERE LEAVE IT OPEN!!!" I took a deep breath and then calmly explained that I just moved here and my key didn't work. I guess he's seen it all because he seemed unbothered by my frantic crazy eyes. He left it unlocked. I then began to trudge up 3 flights of stairs and carry my crap into my apartment. The key worked to my apartment door, thank God!

In the middle of hauling my stuff single handedly, I met one of the pizza shop owners. He asked me where my future husband was and when I told him I was single...he promised to find me a "big strong man" for me to marry. Oh, how I love Greeks. Anyway, my landlord showed up and seem perplexed that I had gained access into the building. He tried my keys and they worked! I couldn't stop myself from laughing...the door was unlocked...of course they worked! I locked the door and we tried the keys again. Of course, they did not work. The problem? I was given the wrong keys. Pop gave me a key off his key ring and BOOM it worked. He apologized profusely, observing that I was a hot mess, literally, and went about his way.

I had a lot of cleaning ahead of me but the sink was unclogged and the fridge was cleaned! This time, the apartment seemed bigger than what I observed on Tuesday. I puttered about, putting some thing away and cleaning as much as I could. The job was too much for one person. I didn't leave until about 9:30 at night (mind you I arrived to the apt around 4). Then I made a trek that I am all too familiar with. Bus to the subway, subway to Frankford, Frankford bus to suburbs, 8 blocks walk to house. I didn't mind considering it would be my last time doing that journey.

I arrived "home" around 10:50 and decided to haul all my crap up from the basement and put it in the garage. I didn't want my moving helpers to have to trek up and down the basement steps. About an hour later, the garage clicker stopped working for me. After hauling ALL my stuff into the garage...I thought I LOCKED all my stuff in there forever. By this time I was tired, frantic, stressed, and doubting that I'd be able to fit all my stuff into my Uhaul. I went to bed at 1am.

Saturday 11/6 - MOVING DAY. 6 hours of sleep later I got up and tried to tie up as many loose ends as I could before picking up my Uhaul. I found a garage clicker that worked and managed to haul more stuff into the garage. Still intimidated by the sheer amount of my stuff, I had no choice but to get my Uhaul and hope for the best. I had a bag of clothing donations to drop off along the way. As it turns out, I RECYCLED my clothes instead of donate them to the needy. I was freaking out about this until I convinced myself that they clothes are sorted before being turned into rags and whatnot.

I get to the Uhaul place, fill out my paperwork and they pull up with my Uhaul. It had a big Venus Flytrap on the side, which I liked, and it looked...small. My biggest fear was that we wouldn't be able to get everything in that Uhaul and it looked so tiny to me. I was disappointed.

Then I had to drive the Uhaul to its first destination. I hate driving on Roosevelt Blvd...and I had to drive a Uhaul on it! (For about 20 feet but still!) I was doing really well until I hit a curb on a Northeast street. I panicked, lost my sense of direction and went to the wrong house. I had to follow my friend to get to the first destination since I spooked so easily. Once we got to the house to pick up my couch...we waited for 20 minutes only to find out the rest of the moving party was at the other house waiting for me!

After I turned the keys over to my friend...the move went smoothly. ALL of my stuff fit in the Uhaul AND it could have fit more stuff if needed. I felt so bad for not believing in my Uhaul and its sheer size. We didn't even use the "mom's attic" section of the truck. The rest of the day was kind of a blur. We pulled up to the apartment and 7 people helped me unload everything. It took us maybe, an hour and a half to get all my stuff into my apartment. Afterwards I bought everyone pizza and returned the Uhaul. We stayed under the gas limit and mileage so I didn't have to pay any extra fees! I wish I took more pictures of the move but everything was happening so quickly. Plus, I didn't want to stand around taking pictures while everyone helped move my stuff.

When I returned from the Uhaul drop off, I discovered that I didn't have my apartment keys. I looked back in the car I drove, around the car, in the apartment, and even had people check the Uhaul drop off place. My keys were nowhere to be found. So my first night in my new place was a little rough. I saw my first bug. I couldn't figure out how to take a nice hot shower. There was an incredibly about of cleaning that needed to be done. I was stressed about the lost keys, the apartment was freezing, I was incredibly exhausted, and I couldn't believe how quickly the process went. I am so grateful for everyone who helped me with this move. I couldn't have done it without them!

Sunday 11/6 - I woke up in the middle of the night freezing and shaking. I wrapped Gilbert's fishbowl in a towel...hoping to warm his water a little bit. I put on fuzzy socks and about 3 blankets onto my already blanketed bed. What a night! When I woke up I kicked into major productivity mode. I put together my kitchen, washing each dish and putting it away. I arranged the living room to roughly how I want it. I called my landlord to get a new set of keys and fortunately, he was understanding of my situation. I was chained to the apartment but at least I got a lot done.

Friday 11/11 - Its almost been a week and I have some clothes in the closet. I've figured out how to take nice hot showers. I'm slowly creating innovative ways to keep the heat inside my building and to keep the draft outside. I haven't seen any bugs (although the mouse trap under the sink worries me). I found the best way to sleep on my bed is close to the wall. I still sleep with socks on but I can sleep though the night easily. I've managed to break down tons of cardboard boxes and recycle them. And most of all, when I open that door after a long day at work...I feel like I'm home. Two nights ago I made Tuna Helper and danced in my kitchen. Sometimes I'll take down my ghetto curtains (a blanket and a huge cardboard box) and look at the PECO building thinking to myself that I always dreamed of living in a big city and here I am.