I feel like I am a dog. Not in a bad way, wait and read the metaphor. So I feel like I am a dog and I have been chasing this car for three years. With each passing day I get closer and closer to catching it. Now, I have finally caught the car. I am standing in the middle of a street with its bumper in my mouth. What on earth do I do now? 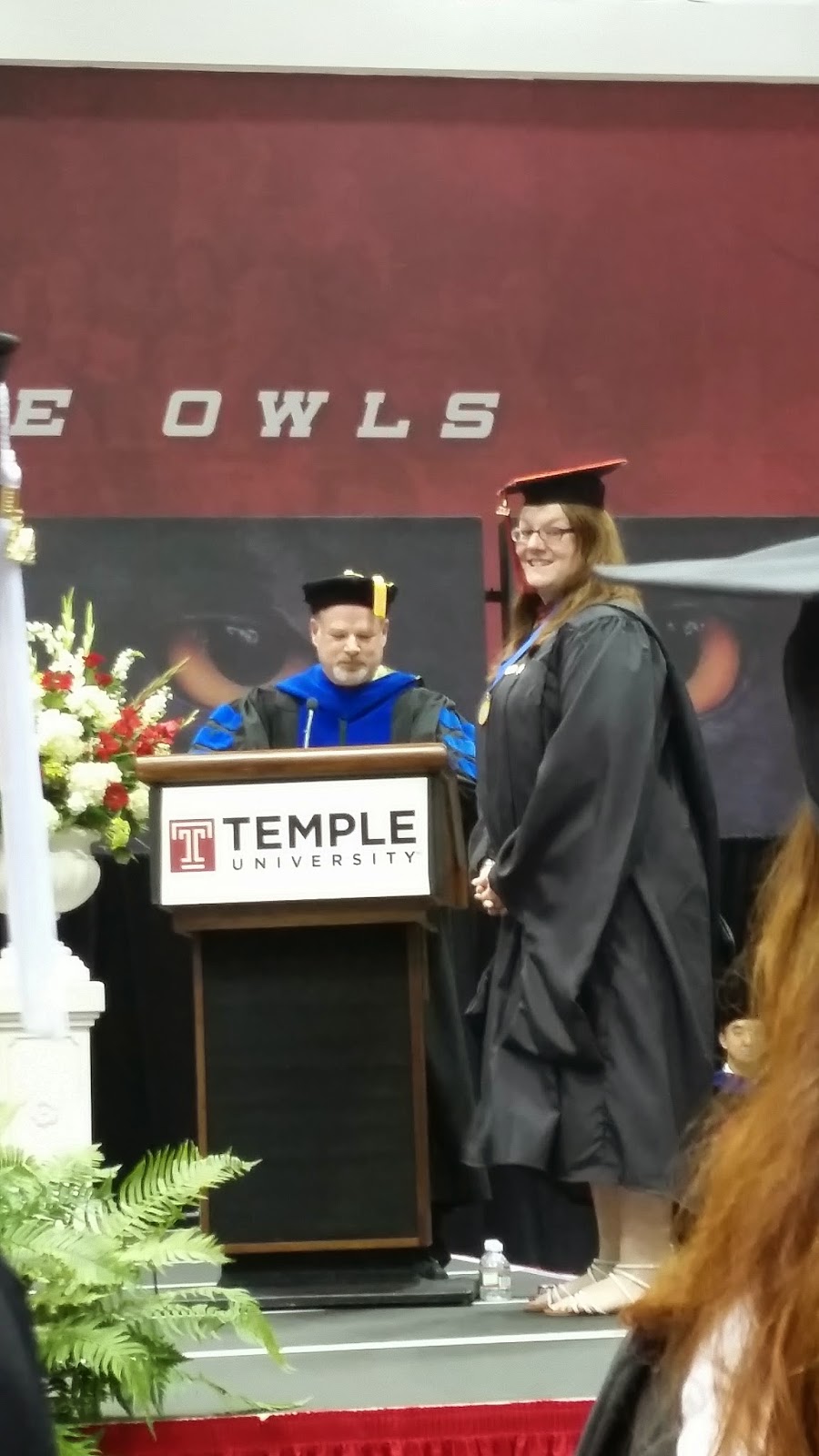 I have graduated. I have a Master's of Journalism. I am done with graduate school. I went for 3 years part-time, worked full-time and was top of my class. I did it.

Graduation itself wasn't quite a blur. My parents and I got there super early. I was in the basement of the Liacouras Center right on time. Unfortunately I missed out on the Shoe Cam (#TUGradShoes) where they took professional photos of your feet before graduating. I was bummed because I got a special Cherry and White pedicure for the occasion. Such is life.

Alexa caught up with me and we started to process in. I am guessing that the feelings you get walking into the Center with over 3,000 people in attendance is a fraction of what Olympic athletes feel during the Opening Ceremony Parade of Nations. Because that is sort of what it felt like. My parents lucked out and got a seat on the right side of the arena. Alexa and I lucked out and got a front row seat in a back section. We had a great view of the festivities and plenty of leg room.

Bill Cosby came to our graduation, as he does every year. Jill Scott received an honorary doctorate. Alexa and I took a bunch of selfies...as did almost everyone. Towards the end of the ceremony, the deans and board of trustee members officially conferred our degrees. Each department had to stand as they "officially" declared our degrees earned. I think that is when it hit me. When they called the doctoral students and the masters students including Masters of Journalism. Alexa and I stood with huge grins on our faces.

Before they announced us, I told her we should grab hands and hold them up, just like Peeta and Katniss in the Hunger Games during the chariot ride in. I said, "they'll love it." Love it they did, for we were asked to do it again and we're in a bunch of graduation slideshows. It is one of my favorite photos. We came into the program together and we're leaving together. 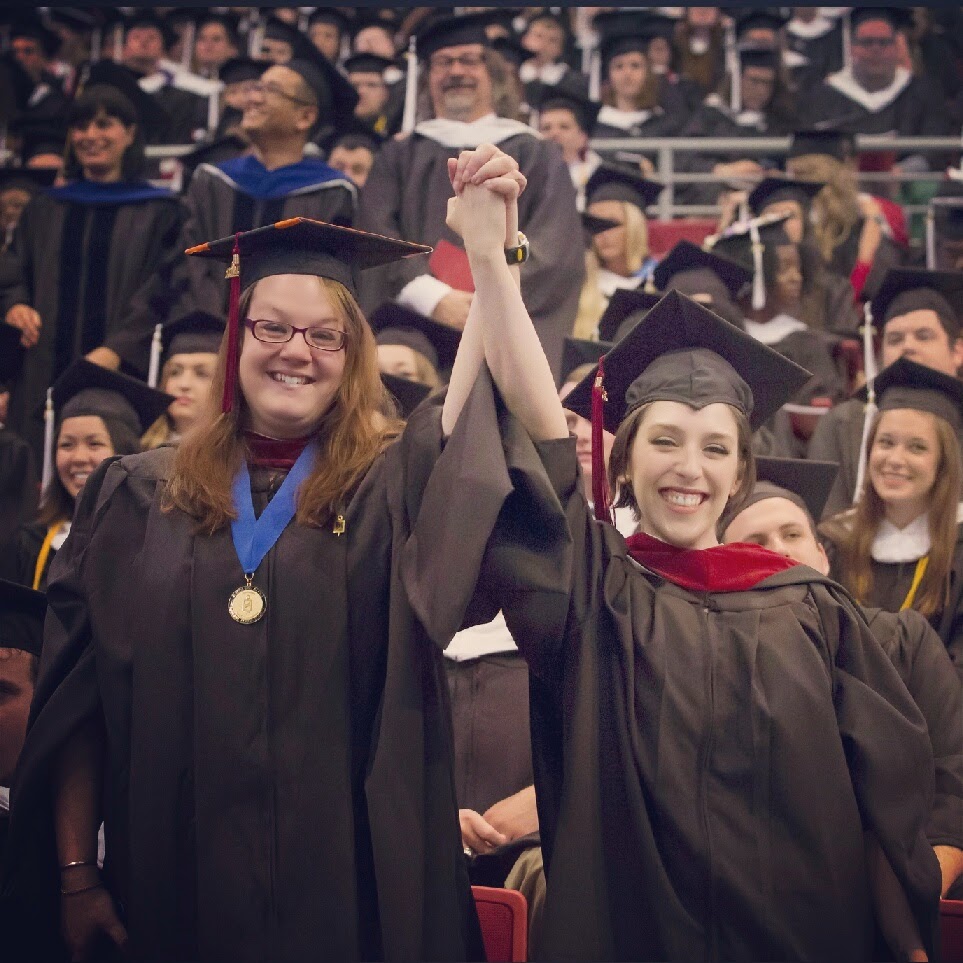 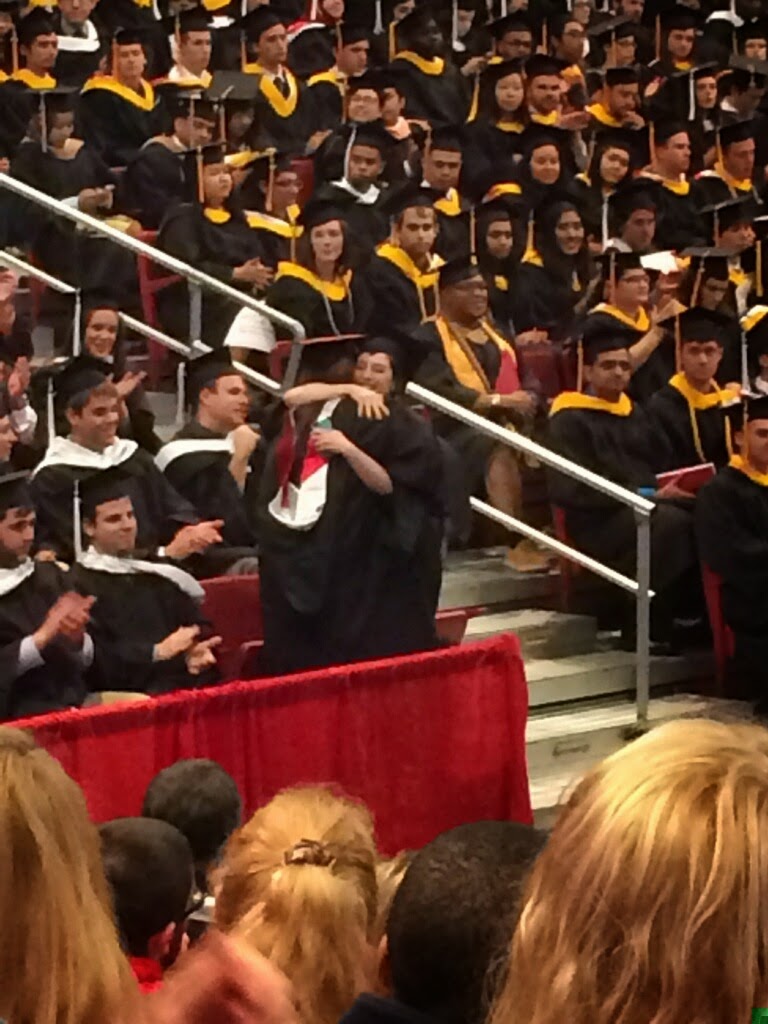 And I seriously thought I was going to cry. All that hard work. Blood. Sweat. Tears. Tequila. Laughter. Stress. Awkward moments. All of it. For this.

Afterwards we had to book it to our departmental ceremony where we officially walk and receive our diplomas. We made it in the nick of time! It was set to start a mere 15 minutes after the large graduation and unfortunately that ran over. However, we got our tickets and took our seats. We managed to get a front row again! My parents were not so lucky. They were all the way up in the right high seats. They could still see me though.

Dan Rather was our commencement speaker. Then he remained on stage to shake the graduates hands. As I went up (I almost forgot you have to turn in your name card to receive your diploma) I paused for a picture that I made an undergrad take with my phone and then shook the dean's hand. A few more people. Then I came to Dan Rather.

He clasped my hand in both of his. Shook it. "Congratulations! What a great accomplishment!" He said. "Thank you Mr. Rather," I replied. "I like your hat!" He said.

Dan Rather liked my hat. I should put that on my resume. By the way, mine is on the left. I am not good with puffy paint, Alexa's is really artistic. Mine is nostalgic. We decorated them a few nights before graduation.

The East Coast Earthquake hit while I was at orientation for the Masters of Journalism program. I was in Annenberg Hall when the ground started shaking. I remember it like it was yesterday. The KTA does not stand for "Kick Temple's Ass," which is what my dad thought. It is actually Kappa Tau Alpha, the Greek letters of the honor society I am now a part of. 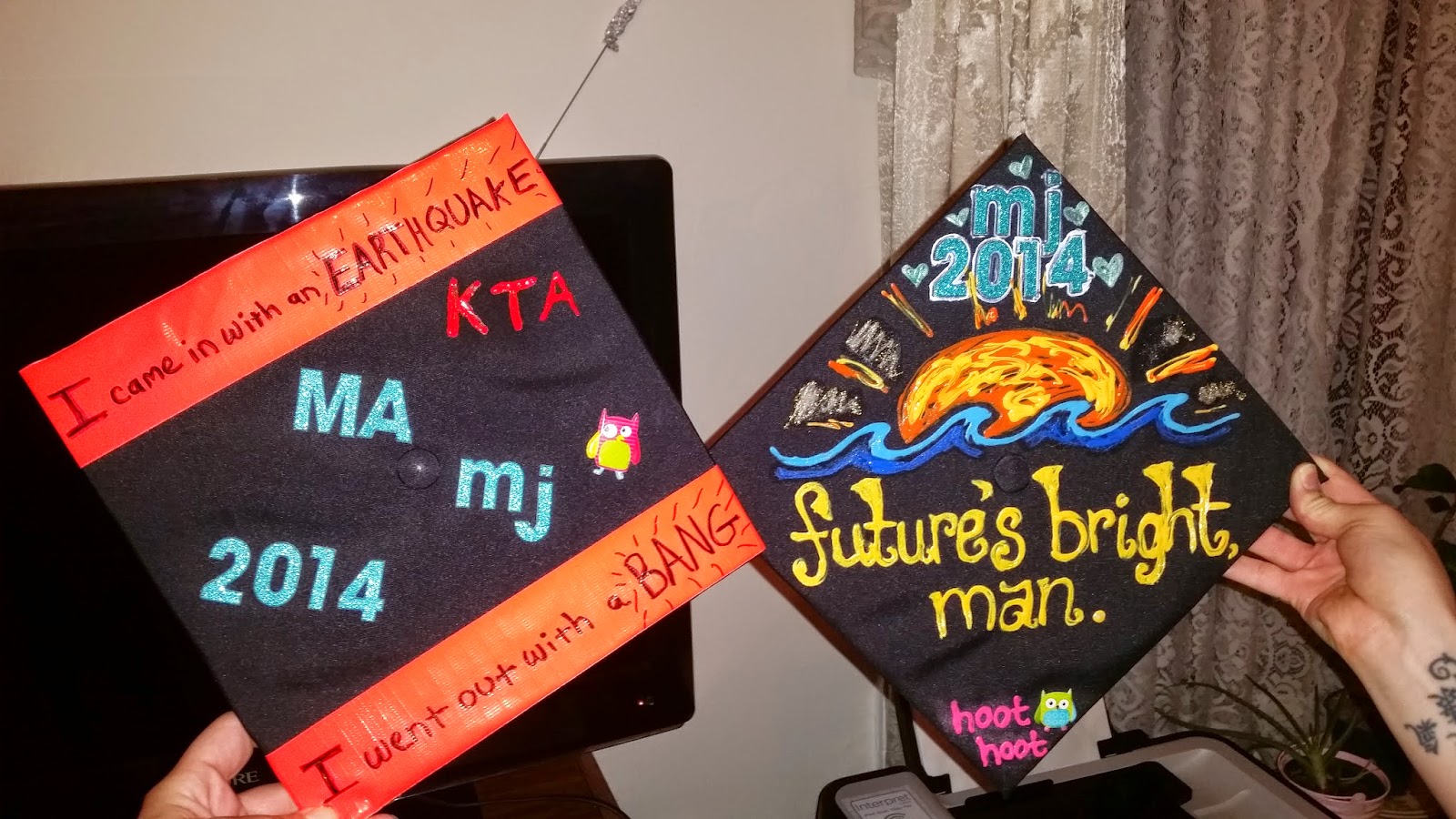 After the departmental ceremony (which was long as hell because they called up over 500 graduates) I gave my parents a brief little tour of the campus along with my good friend Sr. Katharina who came celebrate my graduation with me as well. We went to visit one of my favorite professors. Then I got a graduation crepe from the Crepe Truck! I love that truck. We took a few more pictures and headed home.

To celebrate my graduation, my parents took me out to dinner at my favorite bar. I wore my hat, which got a lot of "Congratulations!" from random people. Actually, all day I got congratulations from passer bys. It was pretty cool. I ate my favorite bbq wings and then my mom snapped this shot with one of my favorite bartenders. That's a lemon drop shot in my hand that one of the other bartenders bought for me to celebrate. God, I love that bar. It is MY bar. 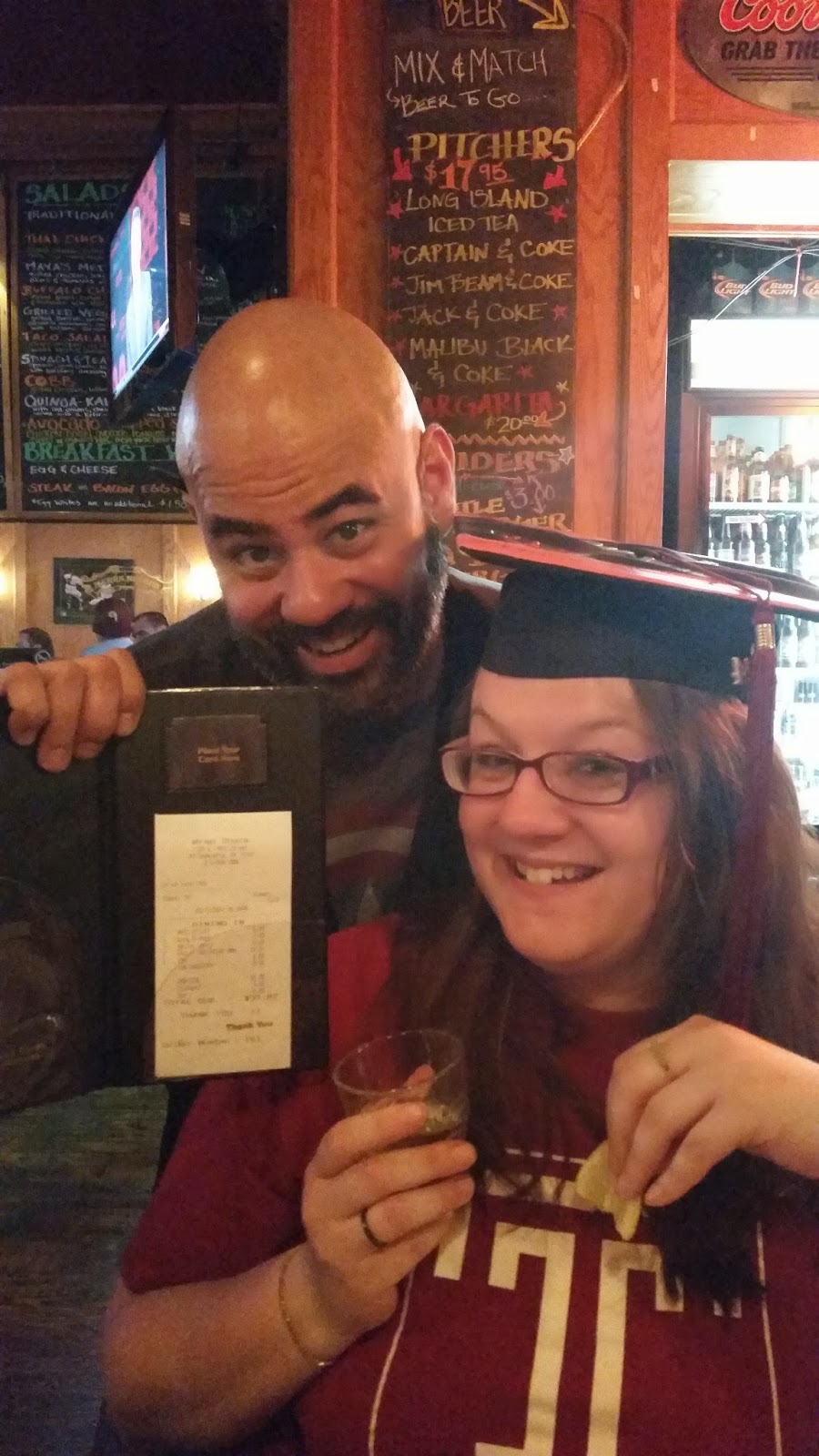 Just when I thought all the celebrations were over. I was browsing the news, like a good little journalist and I saw this. Alexa and I made the news! I sent her a screen shot and she replied...I happened to take a screen shot at the exact moment she text me. So you can see her reaction up top. haha Then a bunch of residents at work said "Ms. Mary Anna! I saw you on the news!" Pretty great. Editing the News II, I had a really crucial interview with a local historian for my audio slideshow project. I made a reservation for a voice recorder and mic from the equipment center. The equipment center HATES grad students. My reservation never went through. Four hours before my interview was set to start, I borrowed a co-workers car, drove to Staples and bought my own voice recorder and then went to Best Buy and bought a microphone. The interview was one of the best ones I ever had and my subject was perfect.

Same class, I had a video project due. This time, the equipment center came through. Except they don't charge their camcorder batteries and if your video cam kit doesn't have a charger, you are out of luck. I had about an hour or so of life left before the camera would die. I needed multiple hours because I had a lot of content to record. So in a panic, I scoured the city and found a universal battery charger for the Canon video camera (actually all Canons ever). I road the bus down to Best Buy and bought the expensive thing right before the store closed. Then I got stranded in South Philadelphia for two hours. It was expensive and a crappy experience but I got the project done and earned an A.

I have traveled the far corner of the burbs to take a handgun training class and do as story on Ladies' Night at the range. I remember having to walk a half a mile back to the bus stop in the freezing cold at night. I hung out with homeless folks during Occupy Philly. I had to find leaves in the dead of winter and identify them. I carried 14 textbooks to and from my Editing I class in a rollie bookbag.

I have stayed up until 3-4am just to finish a project or paper, then sat in class, looking like a zombie. I was hospitalized due to a gallbladder attack and brought schoolwork with me to the ER. During recovery I completed three weeks worth of make up work and turned it all in the next time I went to class.

Three years ago I learned about the Departmental Awards. I learned the Journalism Department had a Top Scholar Plaque for the graduating grad student and undergrad who had the highest GPA. I wanted it.. So I decided to bust my rump to earn it. I cried when I got my first A- but the next one didn't sting too badly. By my final year...I had all A's and three A-'s. 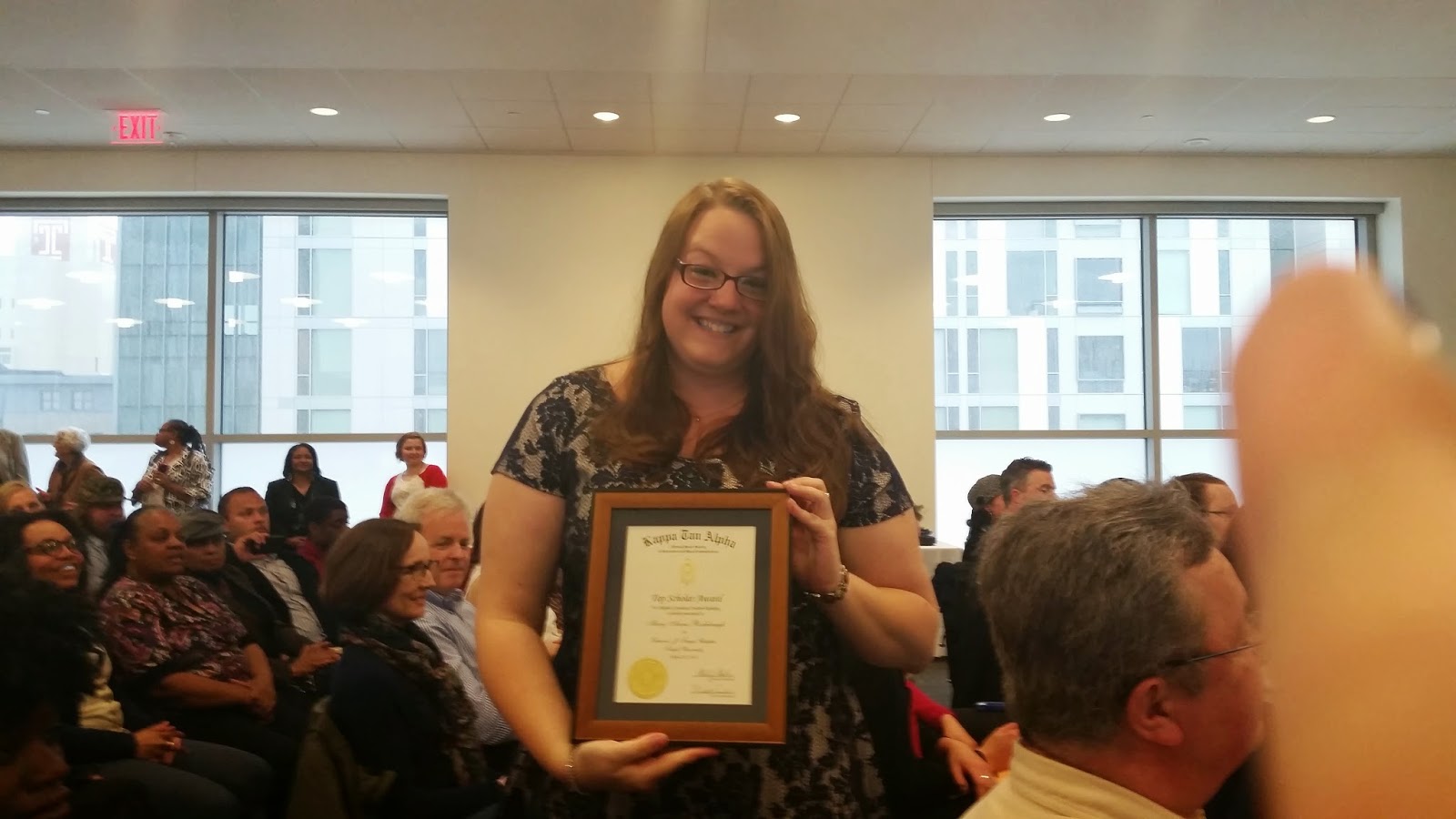 I was awarded Top Scholar. I did it. I made it my goal to win and I did. Bamsies.

By the end of the ceremony, I was inducted into Kappa Tau Alpha, the national journalism honor society equivalent to Phi Beta Kappa. I won the Lori Schipper Graduate Award and of course, Top Scholar. 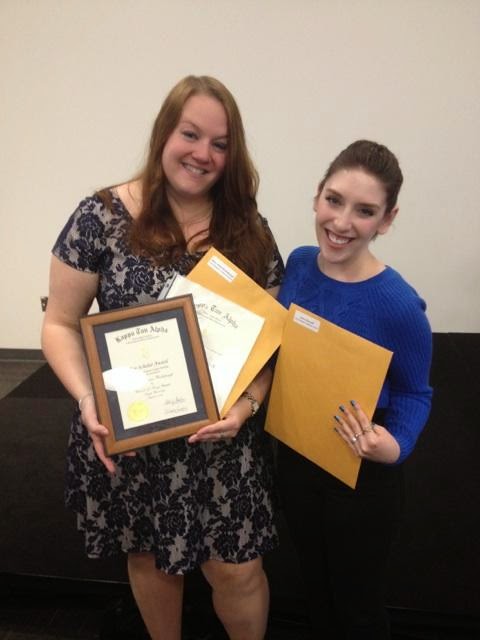 There is a medal and a pin in there too. That is my Journo bestie, Alexa. We came into the program together and we are graduating together. Actually the great Northeast Earthquake occurred during my orientation. So I think I am going to write on my mortarboard: "I came in with an earthquake. I went out with a bang."

I can't believe it has been three years! What a ride!