My last post was in February. I didn’t retire from the blog but I did get caught up in a whirlwind of change and excitement and struggle and growth. Yep, all of these things.

As I said in my last post months ago, my department at work underwent some serious transition. We lost a few staff members, got a few part-time consultants to help keep the department running and I found myself, a manager, doing director-level work.

When I graduated from Temple’s MJ program in 2014, I wanted to be a community journalist. I wanted to write local stories about local people. Human interest stuff. Of course, I’ve chronicled how no one would hire me. The two places that considered me would not offer me a living wage. I mean really, why pay a Master’s level journalist a decent salary when you have undergrad students willing to do it for free. I digress. So, I found myself in this social and digital media manager position. Little did I know what many journalists before me had already figured out: you can still be a journalist in marketing.

I was a storyteller of corporate stories. I shared the daily inspiration of employees. I wrote about patients whose lives had been transformed by our services. Not only that, once I was given a large mass of responsibility due to the shrinking size of our department, I realized how much I enjoyed other parts about marketing. Like, public relations! In three months of “filling in” I coordinated three major news stories about our health system.  I got to work alongside the reporters that I wanted to be.

It was really a telling moment when I spent two months coordinating a story with a regional reporter who I met a few years ago at a Philadelphia Car Show. The anchors were signing autographs and I told her I was a journalism student at Temple. She signed “good luck on your journalism career.” Three years later I’m escorting her and her camera guy around our hospital. It felt completely normal but I knew it was kind of a big deal.

I learned that I also like advertising, especially creating taglines Mad Men style. I found out I was good at things I never even considered when I dreamscaped my future career. I just wanted to write stories about local paper. I never wanted to be a spokesperson for a hospital or weigh in on advertising efforts or coordinate interviews and tapings for local news. I never thought I’d be coordinating a quarterly magazine from start to finish. Now I want to do all of those things, because I’ve been doing those things and it’s thrilling.
Chasing a story from the back end has provided me the same fulfillment as chasing a story from the front. Sitting in my living room and watching our health system be a story on the 11’o clock news gives me such a sense of satisfaction. Witnessing our social media metrics climb, our engagement increase, our blog posts touch people…all of that provides great professional validation.

I didn’t picture myself here at all. Yet here I am. Succeeding. My job challenges me almost every day and I love every second of it.

In terms of non-work related life events, I did indeed run the 2016 Broad Street Run in May. It rained from before the race to well after. It was so hard, (harder than last year) and I struggled through it. It was as if my training was lost on me and I finished two minutes slower than the year prior. I wanted to cry when I finished because running in cold wet rain for 10 miles is no picnic. Every other block my feet slammed into icy cold puddles. It was rough. But finish I did. After that, I wondered what the next running challenge would be. I had met so many supportive runners in the Philadelphia running community, I didn’t want to stop running and just focus on Broad Street 2017. So I did something crazy. I set my alarm the night of the Broad Street Run and registered for the Philadelphia Half Marathon in November. I was one of the first 500 registrants so I got a discounted rate. 13.1 MILES YA’LL! 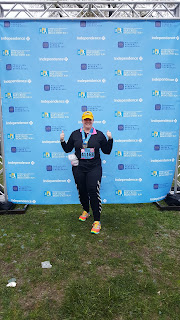 Between now and my first half, I have the Philly 10K, a Flying Fish 5K, training runs, River City Festival 5K, a charity 10K and a butt load of mental preparation to muster. Can I do it? Who the hell knows, but I like the challenge. I also like running and I love the running family in Philly. A few weeks ago, RUN215 had a launch party for the official RUN 215 apparel. Bronx had been acting weird and giving me a lot of crap when I would leave for work or kickboxing. As I was getting ready to go to the party held at a running store, Bronx cried. I said “want to go to a launch party?”

I threw him in the car, drove downtown, found parking and brought him to the party. I didn’t know if dogs were allowed in the store so we just walked in and hoped for the best. EVERYONE LOVED HIM. People were so excited to see a dog. We even got our picture taken in the official photo booth after I bought my shirts. It was so much fun. 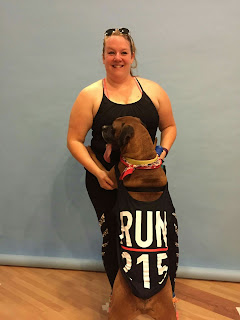 Kickboxing has been great too. I just completed a challenge and earned purple boxing gloves. I’m the first person in the studio to get these purple gloves! Kind of awesome.
I’ve had a lot of adventures lately. Philadelphia seems to be a popular stop on Tour de’ Friends. In the past few months I’ve seen a high school friend, my college sorority Little, a middle school friend and his wife/son, and a good friend from my college days. All of them traveled from faraway places (Florida, DC, update NY) and spent time in Philly. It was great seeing everyone!

Oh and I was in a wedding in April. My hometown bestie, Heather got hitched. My other hometown bestie Beth and I were bridesmaids and our fourth bestie, Clay attended the wedding. We got some great shots of the four of us. That wedding and weekend was A TON OF FUN. Seriously. Lots of dancing too. 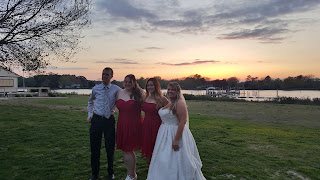 That’s about it for now. I’ll try not to let three months go by before I write again.